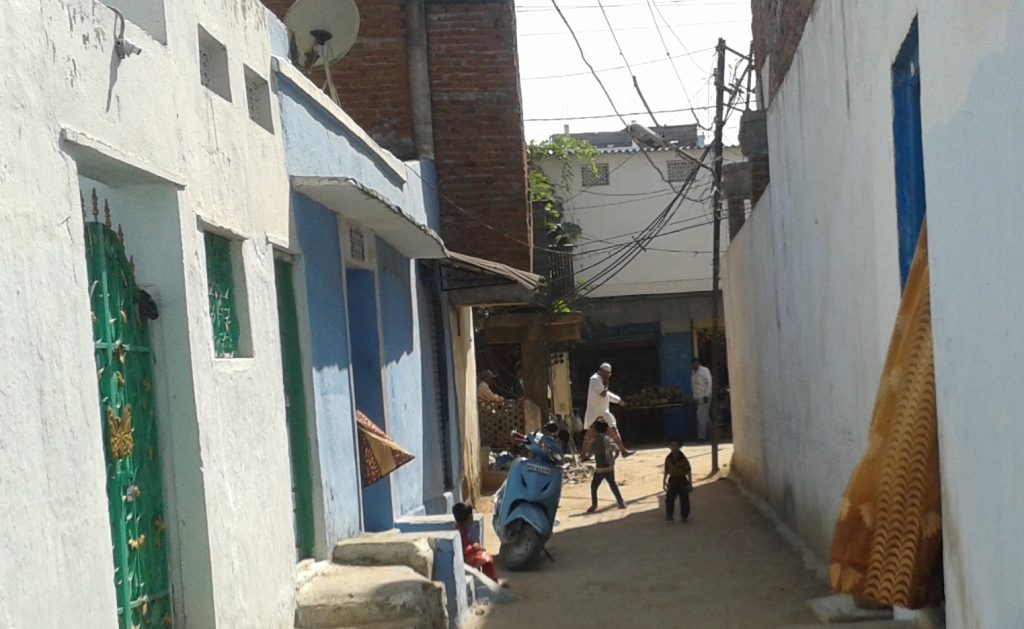 Ali lives in a densely populated Muslim neighbourhood in the Old City in Hyderabad. Besides his parents, he has two younger brothers and they all live in a rented house that is closer to his mother’s maternal grandparents’ home. Ali spends most of the time in his grandparent’s house so do his mother and his younger siblings. We reached Ali’s grandparents’ house in the afternoon. The house is very small but provides shelter for about ten to twelve people. Ali’s grandparents, his uncle and aunties and their families – all live together in the house. Ali and his mother were waiting for us there. This time, it seemed Ali’s cousin brothers and sisters had gone out to play on the street, so the number of children present during our last meeting was significantly reduced. During our introductory visit we have seen many people, including 5-8 children, sharing the small physical space in that tiny house. They offered me a plastic chair to sit besides a small cot. Madhavi, Ali and his mother sat on the cot. The house, which I believe didn’t have more than a room besides the space for cooking and showering, is partitioned with a curtain in the middle of the room. During our introductory visit, the entire family sat with us to interact. This time, the adult members of the family – Ali’s grandmother, aunty and others – pulled the curtain and continued doing their work on the other side of the room when we started our research conversation with Ali. The idea of privacy here is created with the use of curtain for the research space.

What we can read from the above example is how the idea of private or privacy is symbolically created with the material practices i.e. using curtain at home. As Veena Das (2008) argues, first of all, the home is not a totalising space, rather, as the scholars of critical geographies of home illustrate the complexities and competing connotations of ‘home’ exist on a range of scales (Brickell, 2012). As, childhood scholars demonstrate the notion of home transcends several dichotomies including public-private and serve, as shown in the example above, as ‘imaginative space’ for the people those who reside in it (Stevenson and Prout, 2013). The use of curtain here, in a symbolic sense, draws a boundary between us and them – the space for family and the space for research. The notion of private here is created through an act of rendering ‘invisible’, although ‘publicness’ cannot be completely enclosed, as the information can easily be transmitted from one space to another through voices that travel through the curtain. Therefore, the distinction between ‘public’ and ‘private’ here is not very distinct and the boundary/signifier is overlapping to some extent. Yet, what is interesting here is that, as postcolonial scholars suggest, the terms like private and public is not always spatially defined rather one’s imaginings of public/private is culturally and materially defined (Doran and Raja, 2015), as shown in this example.

Generally, the definition of the terms like ‘private’ and ‘public’ is always problematic. There is no consensus in the literatures on what can be defined as ‘private’ and/or ‘public’, and there exist varying explanations and contestations – all because of its revisionist and expansionary scope. As Scott and Ingram (2015) note the term ‘public’ appears rarely a neutral descriptor in literature and it has different connotations politically, socially and culturally. Recent efforts by scholars to study the affective and emotive dimensions of ‘publics’ complicate this process in finding any unified meaning. And, as the example above suggests, the notion of private and public is not always strictly spatial or founded upon the liberal principles of deliberative democracy, rather they are also entangled through imagination within the available material and cultural context.